Below are answers to frequently asked questions about OSnap!™. If you have an idea for a question that you think should appear here, don't hesitate to get in touch with us.

Why review OSnap! in the App Store?

By leaving a positive review in the App Store, you help make OSnap! better! OSnap! is an independent project and your support is both critical to the app's success and immensely appreciated! Go hit 5 stars in the App Store! Do it. Seriously. Okay, we're done begging! :)

With OSnap! Pro you get the following important additional features:

If you are an OSnap! user you can make a one time In-App purchase (the OSnap! Upgrade) to unlock the above features, or alternatively, you can purchase and download OSnap! Pro which will unlock these features in the regular version of OSnap!.

My landscape photos appear small on playback. Why?

If your project's orientation is set to 'Portrait' your landscape photos will be squeezed and letterboxed in order to fit. You can adjust the orientation of your OSnap! project by navigating to your project's settings and locating General > Orientation and choosing 'Landscape'.

Why do I receive an error when attempting to export photos or videos to my camera roll?

How do I import photos?

Please be aware that the Photo Import feature requires a one time In-App purchase of $0.99. To purchase Photo Import: from the OSnap! home screen tap the 'Shopping Cart' button in the upper left and then choose Photo Import.

Once the In-App purchase is complete, the Photo Import option will appear. There are two different spots in OSnap! where you can import photos: 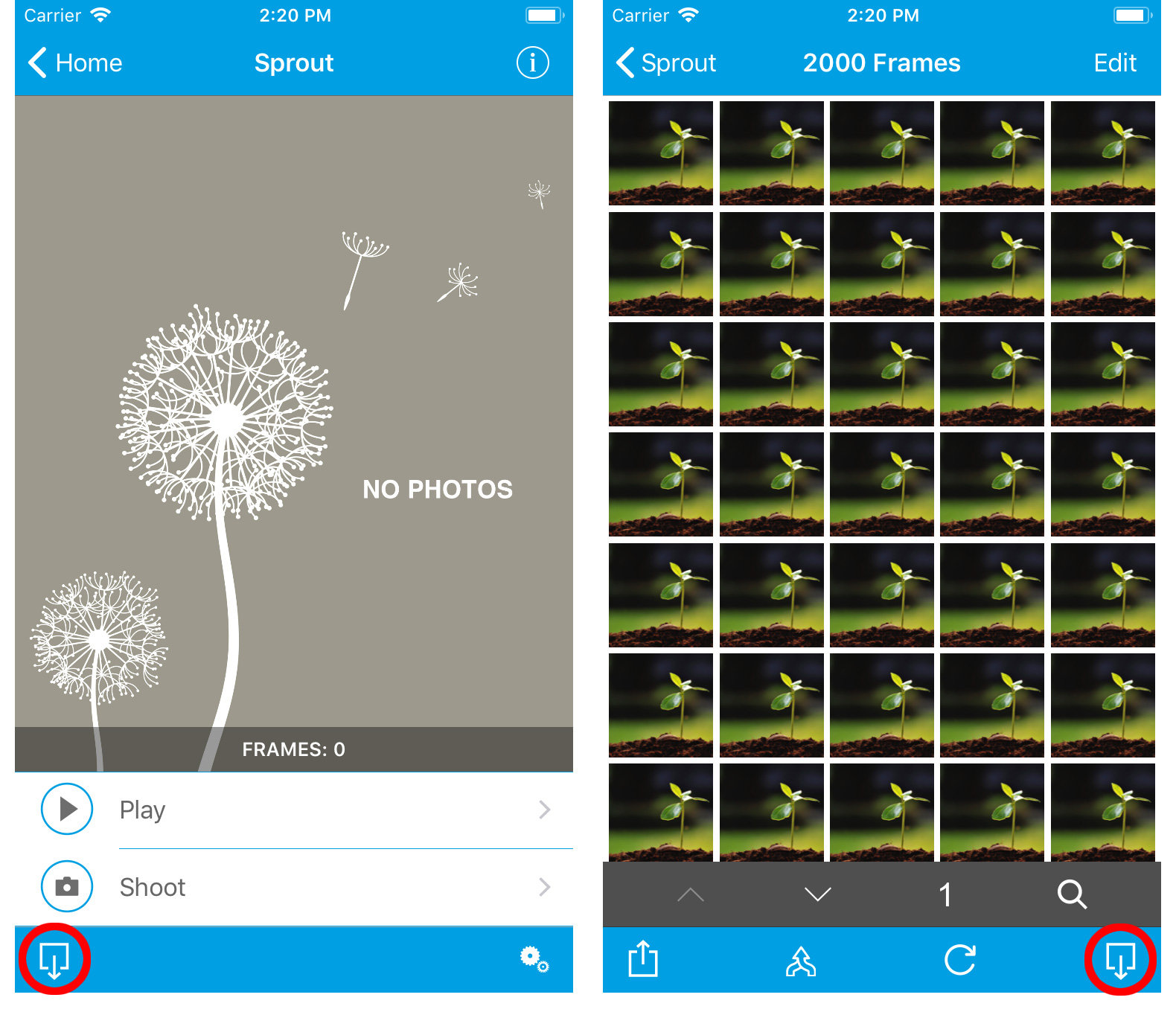 How can I trigger photo captures without touching the device?

One way you can do this is to enable OSnap! 'Listening' mode by tapping the 'sound' icon on the toolbar of the OSnap! camera screen. Once 'Listening' mode is enabled, OSnap! will snap a photo anytime you make a loud sound (e.g, clapping your hands). Another great method for triggering photos without touching the device is to use a pair headphones with volume controls attached to the wire; you can plug these types of headphones into your device and then use the volume+ button to capture photos without touching the device.

How can I turn the shutter sound off when I am taking photos?

iPhones and iPads have a mute switch on the side of the device that you can use to silence the shutter sound while taking pictures. Unfortunately, iPods lack this switch; you can, however, achieve the same effect by plugging headphones into your device. Some countries do not allow the shutter sound to be silenced when taking photos; in these cases none of the above solutions will work. Programmatically silencing the shutter sounds is not allowed by Apple.

How do I use OSnap! Wifi Transfer?

In OSnap!, navigate to your project settings and then choose WiFi Transfer > Transfer Pics & Videos via Wifi. Follow the instructions from there. Please be aware that OSnap! WiFi Transfer requires a one time In-App purchase of $0.99.

Where can I download the OSnap! Wifi Transfer Assistant?

Why won't the OSnap! WiFi Assistant connect to OSnap! on my iOS device?

If you have double checked, tripled checked and checked again that you have entered your OSnap! Connection ID exactly as it appears on your iOS device, then the possibility exists that it could be an issue with your WiFi network. Some home WiFi networks employ AP (access point) isolation, also known as client isolation, by default and disallow connected devices from 'seeing' each other on the network. You can read more about AP isolation here. AP isolation must be disabled on your wireless router in order for OSnap! WiFi Transfer to function.

The photos I downloaded using OSnap! WiFi Transfer have incorrect orientation on my Windows PC. Why?

Don't panic, the embedded EXIF orientation of the photos is correct. Windows explorer and the default Windows Photo Viewer do not honor embedded EXIF orientation data in JPEG files and therefore photos can appear to be rotated incorrectly. If you open and view the same photos using most image viewing/editing software (e.g. Photoshop, Picasa Photo Viewer, etc.) you will see the photo orientation is actually correct. You can read more about Microsoft's decision to exclude JPEG data on this Microsoft Community thread.

What resolution will OSnap! render my final video at?

I keep receiving the warning, "An error was reported while attempting to take a picture. This has likely resulted from a very fast timer interval..." Can anything be done about this?

OSnap! captures high resolution camera generated still photos (not video frame captures like many other apps with similar functionality). Although this creates high quality images, it can also put a heavy load on the camera hardware of your device during rapid capture sessions. If you want to continue to capture at a rapid interval, try reducing the photo capture resolution by navigating to Image Capture > Photo Resolution. Choosing a lower resolution can greatly reduce the amount of stress placed on your camera hardware, and can often resolve these types of errors.

Why does OSnap! suspend photo shoots and other operations when the battery level reaches 5%?

OSnap! uses a local database to keep track of all of the information in your OSnap! projects. Although unlikely, attempting to write to that database in the middle of a device battery failure could potentially result in catastrophic corruption and a complete loss of information, photos and videos. Because users can spend months and even years working on their OSnap! projects, a scenario like the one mentioned above is simply not worth the risk. Additionally, the battery information reported by the system is not particularly precise and 5% ends up being the lowest feasible target available (on iOS 6 and lower that target is 10%).

Using the camera flash with fast timed shooting intervals is resulting in erros. What can be done?

Your device camera flash can only fire so fast. If you are shooting with fast timed intervals and need artificial light, use the 'torch' instead of the flash.

Timed capture sessions really drain my battery. What can be done?

Keeping the device camera readied and snapping photos for long periods of time expends a lot of energy; there's currently no easy way around this. Make sure you have OSnap!'s "Darken Screen to Save Battery" option selected to help combat this problem. Additionally you can turn your device's screen brightness all the way down which should also help. The fact of the matter is, however, for timed photo shoots that are longer than 2 to 3 hours you will most likely need to plug your device into an external power supply.

While shooting, I have received an "Insufficient Disk Space" message from OSnap! but I still have some available space on my device. Why?

Although OSnap! may appear to suspend a photo shoot well in advance of exceeding your hard drive limit, keep in mind that thumbnail and preview images may still need to be generated for each photo taken and, consequently, additional hard drive space will be required. Also, OSnap! does not want to fill your iOS hard drive completely to the brim (which can often cause unforeseen problems), so it takes a relatively conservative approach in this area.

Why doesn't OSnap! render videos at the full resolution of the original photos (e.g., 3264x2448 for iPhone 4s back camera)?

This would be a really cool idea in theory. The problem is it doesn't work. Once you start getting resolution up above the figures specified above, you start running into system errors with saving, playing and exporting videos. You can, of course, export your photos at full resolution and import them into a desktop video editing program in order to create very high resolution videos.

OSnap! sometime seems to take a long time to render videos. What's up with that?

Depending on the specifics of your project and device, OSnap! can sometimes seem to take its sweet time rendering videos. OSnap! places a lot of emphasis on rendering your videos out at very high quality, so that the result is extra smooth, vivid and clear. The app uses high resolution camera generated still photos (not video frame captures), and also takes special care to mimic and accommodate your chosen frame rate in the video output. OSnap!'s live playback feature is designed to allow you to tweak your time-lapse to perfection before rendering so that you only have to render once. If you are looking for ways to cut down on video rendering time, effective strategies include: 1) shooting with lower resolution photos; and 2) lowering the frame rate of your final time-lapse (both of which require up front planning of course).

I have a great idea for a new feature! I would really like OSnap! to have [insert your feature here]. When can you make this happen?

If you have a great idea for a new feature, drop us an email at or feel free to post on our Facebook page. We keep a running list of all of our feature requests, and OSnap! continues to evolve and improve as a result of user input. Having said that, if you are interested in seeing OSnap! updates, one of the most important things you can do is to leave us a positive review in the App Store. The success of the app is due in large part to user reviews, and the more momentum OSnap! gains, the more we are able to scrounge up the substantial resources necessary to design and implement new features.

When uploading my video to YouTube the final output seems slightly jerky. The original video I rendered was silky smooth. Why?

The human eye is an amazing thing, capable of detecting subtle difference in video even at very high frame rates. Because of this OSnap! uses special processing algorithms to maintain fidelity to your chosen frame rate, outputting H.264 video at non standard frame rates in order to insure there are no differences between your live playback preview and your final video. If we were to mindlessly drop frames in order to render video at a more standard frame rate, you would certainly be able to tell the difference (given the right type of time-lapse footage). YouTube does exactly this, converting and standardizing your video frame rate to something close to 30 FPS. This standardization, combined with YouTube compression, can sometimes result in a slightly 'jerky' video, usually only noticeable in situations where video smoothness is important such as cloudscapes or sunsets. To date, the best way to mitigate this effect is to try and plan for a time-lapse that is 30 FPS which, when uploaded to YouTube, should undergo less of a drastic frame rate change.

I have run out of space on my device and want to export photos. What now?

If you attempt to export an entire OSnap! project (i.e., all photos at once), OSnap! will first (conservatively) attempt to calculate how much free space it thinks you need in order to transfer all photos to your camera roll. If you run into an insufficient disk space error, you can use OSnap! WiFi Transfer to transfer photos and videos directly to your Mac or PC via your home WiFi network.

If using OSnap! WiFi Transfer is not an option for you (e.g. you don't have access to a home WiFi network or you don't want to spend the $0.99 for the OSnap! WiFi Transfer In-App purchase), another strategy you might try is to 1) free up as much space as possible on your device; and 2) begin exporting your photos piecemeal by navigating to your project's 'thumbs' screen and selecting Edit > Select All and then Save Selected Photos to Camera Roll....you can then move to the next 'thumbs' screen and repeat this process until you run out of space on the device at which point you can move the exported photos to your PC or Mac and begin again where you left off.